Detection is an important application of computer vision. In this post I’m going to detail out how to do real time face detection using Viola Jones Algorithm introduced in paper Rapid object detection using a boosted cascade of simple features (2001). Mind the word detection, we are not going to recognize, means which one the face belong. This is merely detection that there is a face in a given image. We are going to use OpenCV (Open Source Computer Vision Library). OpenCV is written in C++ but there are interfaces for other languages so will use, preferably python.

Instructions are for OSX. Steps as follows

Let’s do a quick implementation.

We are going to read a video file frame by frame, applying Viola Jones algorithm with trained parameters then apply a rectangle layer if a face found, displaying modified output frame by frame.

Next we are going to load the trained model. haarcascade_frontalface_default.xml is a model already trained using lot of faces and non faces and lot of computing power. Training good models sometime takes days not hours. Thankfully above model is trained by Intel using lot of data. The model we are using here comes with the installation of OpenCv. Generally you can find those models at your opencv-installation-directory/share/OpenCV/haarcascades but this could differ depends on your OS and installation method.

Next in the while loop we are reading frame by frame. Then get given frame and convert into gray scale.

A frame is a array of 3 matrices where each matrix is for the respective color blue, green, red. Did you noticed the revered order? In OpenCV default representation is BGR not RGB. In the above step we are converting it to gray scale image. gray is a single matrix now.

detectMultiScale function detect faces and return an array of position coordinates and sizes. Second parameter is scaleFactor. To reduce true negatives you must use a value near to zero. Basically the algorithm can only detect it’s trained size usually around 20x20 pixel. To detect large object area get scaled by scaleFactor. If scaleFactor is scaled block size would equal to . If scaleFactor is equal to 1.3 in above image scaled block size is so you may miss some pixels, so do some faces. Trade off is accuracy vs performance.

3rd parameter is minNeighbors. It defines how many neighbor rectangles should identified to retain it. Higher value means less false positives.

Next we draw red rectangles if faces detected. Notice how we passed red color in BGR format (0 , 0, 255).

Next we are writing to a window frame by frame. If you press key q the loop will break and video will stop. I’ve created a quick video from the output here. Notice how it detects only frontal faces, because model is trained for frontal faces.

Viola Jones algorithm is a machine learning algorithm developed by Paul Viola and Michael Jones in 2001. It was designed to be very fast even to be possible in embedded systems. We can break down it to 4 parts

Haar like features, named after the Hungarian mathematician Alfred Haar is a way of identifying features in a image in a more abstract way.

To calculate a feature following equation is used.

In the case of face detection following feature will give a higher value in the positioned area, that defines a feature. 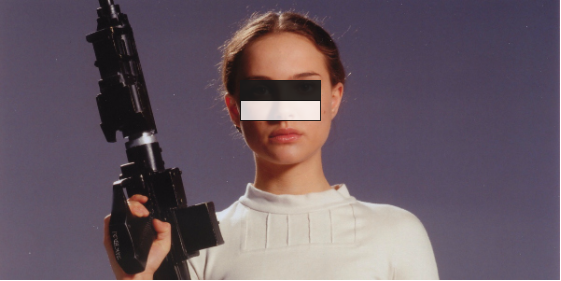 Eye area in the are generally darker than under the eye, so will give higher value. And that’s defines single feature.

Intergral image is a way to calculate rectangle features quickly

Every position is sum of the top and left values. Note this code is written for clarity, there are more efficeint way to write this. In this case you will be feeding a normalized image to the fuction. Purpose of normaizing first is to get rid of conditions of lighting effects.

Whole purpose of integral image is to calulate sum of pixels inside a given rectangle fast. 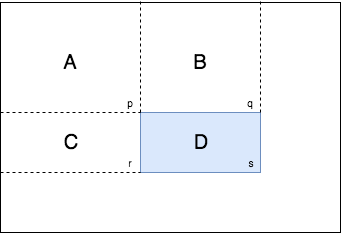 We knows values p, q, r, s in integral image and they represnt the sum of all the left and top values. Our goal is to find pixel sum of D.

So which will reduce computation steps to calulate sum of pixels in defined rectangle significantly.

Now we need a way to select best features from all possible features that can correctly classify a face. AdaBoost algorithm was formulated by Yoav Freund and Robert Schapire in 1997 and won the prestigious Gödel Prize in 2003. This elegant machine learning approach can be applied to wide range of problems not only image detection.

I’ll start with the idea of weak and strong classifiers.

Adaboost itself is a inhertantly incomplete algorithm, so it’s called a meta algorithm. Let’s express the idea of strong classifier mathematically.

Here strong classifier sign is negative so it may not be a face. I started with this analogy but we have to also weight the weak classifiers because some classifiers may have strong influence than others.

By adding weights strong classifier get little complicated but it’s nothing more than a simple inequality match.

Now how we decide which weak classifier to use, which weights to use? That’s why we need to train over existing labeled data. Suppose image is and label is which is 1 for face and 0 for non face. Given example images we will initialize weights for each example. Don’t confuse this weight with the weight discussed before. This algorithm has two kind of weights. One is weight for selected weak classifier. Other one is for each example and each step denoted by . Now we are going to intialize weights mentioned later for step one

Here we have normalized the weights so sum of the weights is 1. We do the normalize in every step to make sure weight distribution is always adds up to 1.

The generalized normalized equation is

Next we loop over all the features to select the best weak classifier which minimize error rate.

Here calculating the sum of weights of misclassified examples which is the error rate represented by epsilon . Notice return 1 or -1 if the misclassified, 0 is correctly classified. We are taking the absolute value out of it so weight get multiplied by 1 if misclassified. Let’s dive into the definition of weak classifier.

is the ‘th image example. is the Haar feature. is the polarity which is either -1 or +1 which defines direction of the inequality. is the threshold.

To select the feature we need loop over f(x) Haar classifier. To select the threshold we need to minimize the following equation.

Here’s the definition of symbols

Finally calculate for the selected classifier.

Notice how going to be a higher value if error rate is small so that weak classifier has more contribution to strong classifier.

So finally algorithm need to loop steps to find classifiers to get good results.

You may have noticed how many loops we have in the algorithm so this AdaBoost along with Haar Features is computationally expensive for real time detection. So we are using attentional cascade to reduce some unnecessary computations. More efficient cascade can be constructed so that negative sub windows will rejected early. Every stage of cascade is a strong classifier, so all the features are grouped into several stages where each stage has a several number of features.

For the cascade we need following parameters

Finding optimum values for above parameters is a difficult task. Viola Jones introduced a simple method to find the optimum combination.

Now we are looping until pre defined is met by adding new stages. In stages we keep adding features until and is met. By doing this we are going to create a cascade of strong classifiers.

To learn more about AdaBoost read the book Boosting Foundations and Algorithms. It’s written by the original authors of the algorithm.