Enter following lines of code in the cell and press Shift + Enter which will execute the code. Full notebook of the code I used in this post is also available on github.

Matplotlib is a plotting library. We will use it to visualize our data.

In this post I’m not going to use any real data set. Instead I’m going to generate some random data.

This is the plot generate from the code. Every blue dot is a data point. There are 100 blue dots here. 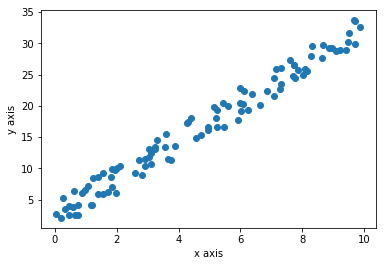 Data is distributed in sort of linear nature because of the way we generate random data.

We going to use following equation which is called least square method.

If we pass normal python integer values to x, theta0, theta1 it will output an integer. What will happen if we change x to a numpy array. All values get multiplied by theta1, then all values will get added by theta0. Output will be a numpy array. This happens because of a python feature called broadcasting. It will save us from writing a for loop to calculate all the values step by step. Broadcastng is a very powerpull concept. Use of broadcasting will be used everywhere when doing machine learning in python. Next we implement cost function in python

Gradient descent is an iterative algorithm to find out the minimum of a function. This is what we are going to do.

I will explain step by step. First \(:=\) is the assignment operator. In programming languages we use \(=\) operator but in math it means equality. So \(:=\) means assignment in mathematics. \(\alpha\) is called the learning rate which I will explain later in detail. \(\frac{\partial}{\partial \theta_0} J(\theta_0, \theta_1)\) is called the derivative part.

This is what the plot looks with \(\theta_0\) against cost function like after 100,000 iterations. 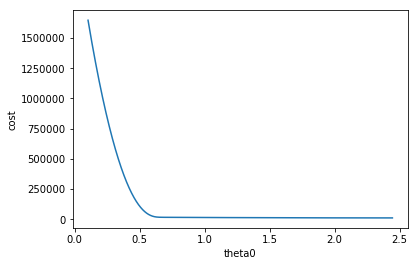 Derivative is measuring the slope, You can see the slope is a negative value as the plot going down. \(\alpha\) is the learning rate which is \(0.0001\). So

Now we are ready to take the derivative.

After taking the derivative,

We are initializing theta0 and theta1 to 0. Learning rate alpha to be 0.001. You must choose a smaller value unless it may not going to converge smoothly. Also note that you must use temporary values while assigning.

Now that we have found optimal theta0 and theta1 values below we draw a line in top of the first plot. 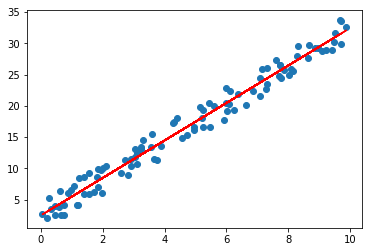 You can see that algorithm learned to draw the most optimal line over the data distribution.

Here comes the easy part. Now we have a model with learned parameters which can be used to predict. We can use our hypothesis function.

Here’s how you import the library

You can see that values are similar to our own implementation.